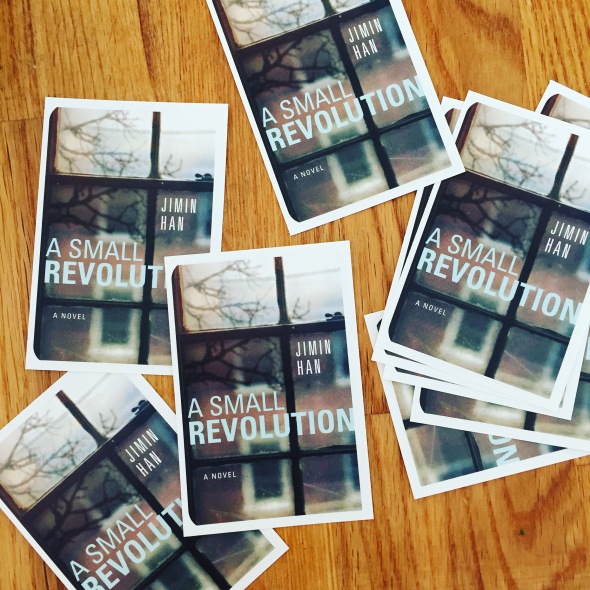 A few of the special media mentions recently!

The Chautauquan Daily published this article written by the wonderful Amy Guay during my week as writer-in-residence for Chautauqua Literary Arts a week in July. 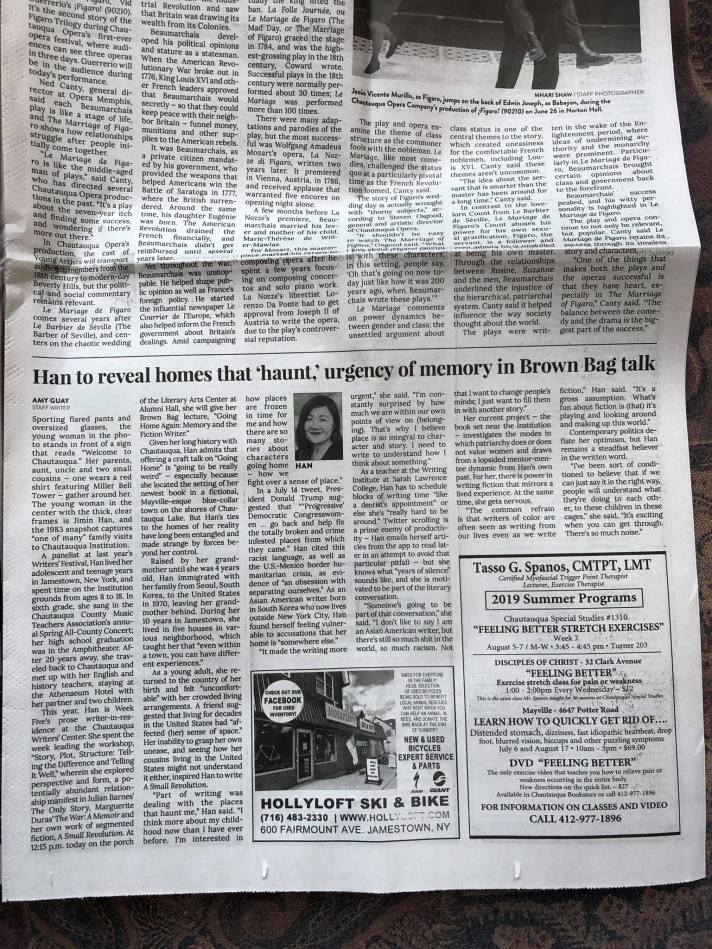 Honored to judge this essay contest at Parks and Points which highlights the importance of public lands. Click this link for contest rules. Submission deadline: November 15, 2018. Excited to read your essays!

True pleasure to talk with Andrew Tonkovich at Bibliocracy Radio at KPFK in this interview. As a fan of his show, I was bowled over to hear his generous and close analysis of A SMALL REVOLUTION.

Asian American Writers’ Workshop has a podcast over at iTunes and my reading and convo with Yoojin Grace Wuertz and E. Tammy Kim are featured there. It was such a great night that I’m thrilled you can experience it for free. It’s called LOVE AND DEMOCRACY.

This powerhouse list by Chaya Bhuvaneswar at Electric Literature. Moved beyond words that A Small Revolution was included, especially on the eve of the Women’s March.

If you’ve been playing around with the Google Arts & Culture App and want to win a free copy of A Small Revolution, Korean American Story has a giveaway going on over on their Facebook Page. Deadline is January 21. Check it out!

Honored to see A Small Revolution on Matthew Salesses’s list of best books of 2017 over at Pleiades Magazine .

Gratitude to Entropy Magazine and its readers to be named in this list of best fiction of 2017.

One of the best party-readings of the year was organized by Korean American Story, with fellow writers Patty Yumi Cottrell, Min Jin Lee, Yoojin Grace Wuertz, Jung Yun, introduction by Minsoo Kang, and moderator tv anchor Vivian Lee. You can hear all our personal stories on YouTube part 1 and part 2 Q&A here.

More lists that ASR was lucky to be included in! The last three are from Goodreads Listopia:

Taking us back to summer! Brooklyn Book Festival recorded the wonderful panel I was on, called Working with Amazon Publishing, with Kimberly Rae Miller and Marc Levy, introduced and moderated by the brilliant Carmen Johnson. You can hear us chat here. Lots of fun as we answer Carmen’s tough questions and look back on our publishing process.

PEN America, the leading international human rights and literary organization asked me to talk with Hafizah Geter. So grateful for this honor. Here’s the interview.

I’ve always loved Poets & Writers– one of the first magazines on writers and writing that I bought when I first moved to NYC so I’m especially moved to have an excerpt of A SMALL REVOLUTION appear in the November/December 2017 issue of Poets & Writers Magazine.

Thrilled that brilliant Courtney Maum, author of TOUCH, recommended A SMALL REVOLUTION as a best beach read over at CNN.

Jung Yun, author of the stunning novel Shelter, gives the book its historical and political context in her brilliant review at Los Angeles Review of Books

Leland Cheuk, amazing author of Letters from Dinosaurs & The Misadventures of Sulliver Pong, wrote a great review of A Small Revolution over at Electric Literature

Loved talking with brilliant Terry Hong over at Bloom in a Q&A that covered a lot of years.

Go Away With Jae has been a favorite travel columnist of mine for a long time. Fabulous Jae-Ha Kim’s column appears in both LA Times & Chicago Tribune.

Eloquent Terry Hong over at  Booklist Online (American Library Association)  with a review of A Small Revolution.

Westchester is a pretty great place to live. I got to talk about why with terrific Wee Westchester

So excited that Little A is included in this list and A SMALL REVOLUTION mentioned over at The Great 2017 Indie Press Preview.

“This book will take you on an emotional rollercoaster ride…” – 20 Books By Women You Must Read This Spring, Redbook Magazine

“In this compact debut novel, a young woman receives a swift education in love, violence, and the politics of 1980s Korea.” – Kirkus Reviews

“I’d compiled a more robust lineup. It then occurred to me that other readers and reviewers who also care about diversity in books might like having such a list.” – R.O. Kwon, 34 Books by Women of Color to Read This Year, Electric Literature

Buzzfeed included A SMALL REVOLUTION on its list! 6 Binge-Worthy Literary Books of May.

“No matter the shotguns of abuse or the bullets of tyranny. It’s the courage of voices like Yoona, and Jimin Han, that force change. I couldn’t stop reading A Small Revolution once I began.” – Review of A Small Revolution at Entropy Magazine by the great Peter Tieryas

Honored and thrilled to announce advance praise for A Small Revolution from some super talents:

“We’ve all wondered what it’s like inside the rooms where the horrors unfold. Jimin Han’s relentless, timely A Small Revolution grabs you by the collar and pulls you inside, then back through her sympathetic character’s history to answer that question: How does a good girl end up inside a brutal disaster? How does young love become a mirage of political activism—and accident become hostage-taking and murder? Open the book; remember to breathe.”

—Gwendolen Gross, author of When She Was Gone and The Orphan Sister

—Julie Iromuanya, author of Mr. and Mrs. Doctor, a finalist for the 2016 PEN/Faulkner Award and the 2016 PEN/Robert W. Bingham Prize for Debut Fiction

“Jimin Han’s debut novel, A Small Revolution, is a riveting and mysterious tale of young love, political intrigue, family secrets, and dangerous obsession rendered in prose so gripping I couldn’t put it down.”

—Joy Castro, author of The Truth Book and Hell or High Water

“With exquisite precision, Jimin Han’s A Small Revolution transforms the claustrophobic confines of an unfolding hostage crisis into an expansive meditation on the collisions between past and present, hope and fear, life and death. Elegant, elegiac, and unsettling, each new page offers insight and revelation.”

—Steve Edwards, author of Breaking into the Backcountry

“Jimin Han’s A Small Revolution packs a big punch. With a front story taken from the headlines of gunmen on college campuses and a haunting backstory of events in Korea, our protagonist is forced into walking a tightrope between two worlds, as well as the past and present.”

—Alan Russell, author of Lost Dog and Guardians of the Night

This interview with Joy Castro:

“Right now, I’m hot for Elena Ferrante and Clarice Lispector, as many avid readers are. Jimin Han’s debut novel, A Small Revolution, will be out soon from Little A, and I think there’s going to be a lot of excitement when it drops. It’s about Korean politics, young love, and obsession.”